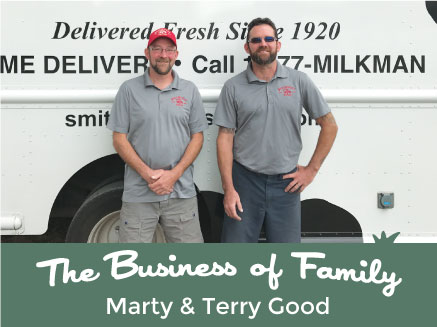 When we say we’re a family business, it’s not just the Smith family we’re talking about. Meet Milkmen Marty and Terry Good. The two brothers have been Milkmen for over 50 years combined. Their father, Wally Good, was a local Milkman for 41 years.

Even though their father was a Milkman, neither of them planned on becoming Milkmen themselves. Terry wanted to be a mechanic, and Marty never considered his father’s career. However, Wally got them started delivering milk as young men and they haven’t looked back since.

The two brothers and their families remain close. Terry, his three children and his wife of 25 years still spend time camping and vacationing with Marty’s family – he and his four kids.

When asked who is the better Milkman, both laughed and declined to comment. But one thing is clear, they are proud of their legacy and they love the family business.

Comments
If Terry and Marty are anything like their father they are both amazing!  Wally was THE BEST!
CATEGORIES/TAGS
Farm Feed Archive